​The honey bees of Malta are similar in size to A m Sicula and A m Intermissa, but have shorter legs and wings; the wings are also much narrower. The abdomen of the bees found in Malta is considerably wider (ster- num index [SI] = 77.74) than in its relative, A m intermissa (81.52). Thus, A m ruttneri is the ’broadest’ subspecies of A mellifera, even broader than A m mellifera (SI = 78.61) (Ruttner 1992). While the pigmentation of the bees does not differ much from A m intermissa or A m sicula, they have considerably longer hair on the abdomen. Whereas the cubital distances of A m ruttneri differ greatly from A m sicula and A m intermissa, the cubital index is similar to A m sicula, but different from A m intermissa. 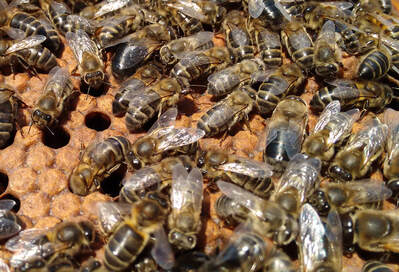 Maltese Bee (Apis Mellifera Ruttneri)
It As it evolved into isolation, it was characterized as a subspecies: although closely related to the Itermissa bee, its behavioral morphological characteristics became differentiated.

Compared to the North African black bee, it is in fact less aggressive, has a less marked tendency to swarming. Precisely because of its African descent, it bears hot and dry summers well and starts up very quickly in the autumn when the first rains arrive.

Accustomed to the mutability of the Mediterranean climate, it also flies in difficult conditions (very hot, cold or windy days). This is why it lends itself very well to being used in pollination.

While presenting many positive characteristics (those in which European bees such as the Italian or the Carniolan are lacking), little or nothing has been done so far in the selection of this very interesting subspecies.

Its combination with the Italian bee, once stabilized without the negative characteristics of both subspecies, has the same potential as the Buckfast bee, which instead of base is a combination of Italian and Mellifera bee.